Different Types of Cigar Cutter and How to Use Them 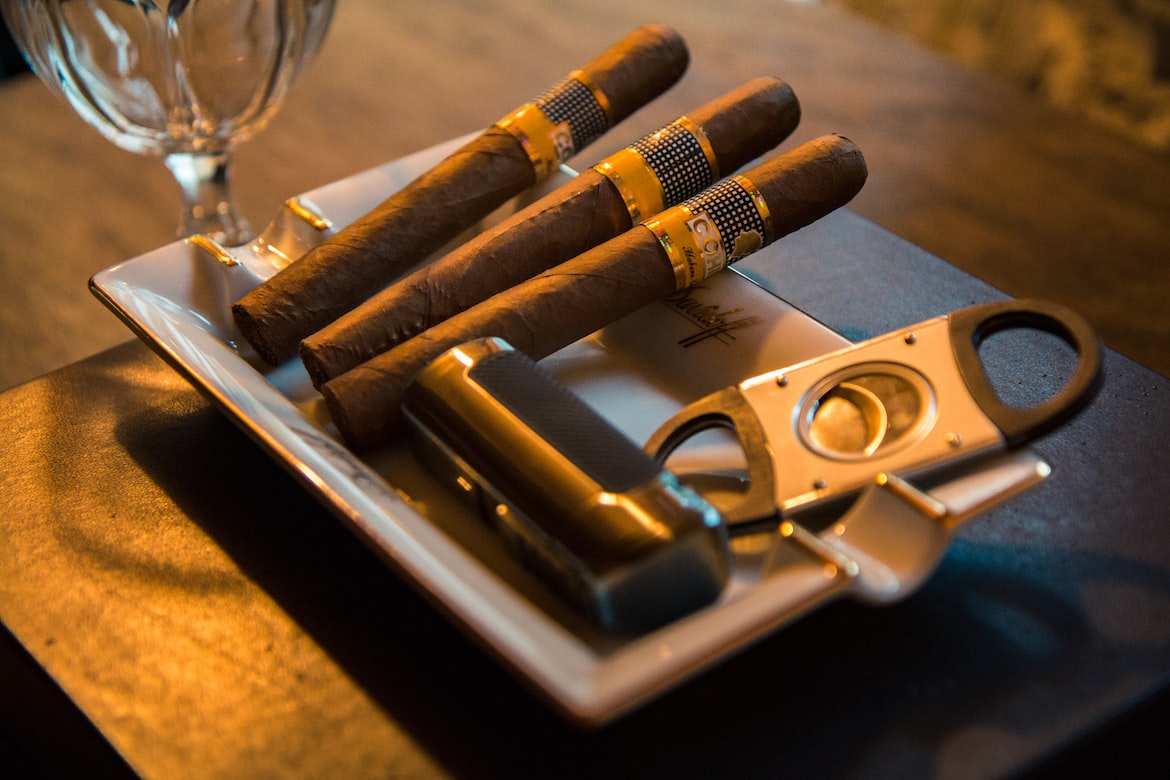 For a premium cigar smoking experience, cutting your cigar correctly is crucial. Virtually every premium cigar on the market is capped on the smoking end in order to keep the tobacco tightly compressed and wrapped until you’re ready to smoke it. Cutting a cigar is a skill any enthusiast needs, as making a cut in the wrong place can cause the wrapper to unravel, while getting the right cut can enhance the smoke.

What is a cigar cutter?

Cigar cutters are an essential tool for a cigar-lover. They trim off the head of the cigar where it is capped to keep the cigar together, allowing it to be smoked. Cigar cutters are tools which are specifically designed to cut through a cigar in a clean and neat way, ensuring that it’s in perfect smoking condition. Most cigars have several small seams which curve around its head, indicating where the cap is. It’s the cap that you want to remove as cleanly as possible.

A guillotine cutter, also known as a straight cutter, can have either one or two blades, and is designed to give a smooth cut across the head of the cigar. These blades must be extremely sharp in order to give the cleanest possible cut. The cutter, as you might imagine from this it’s name, takes a similar form to the guillotine used to execute traitors during the bloodiest years of the French Revolution, as the blade drops down to slice through the cap of the cigar. Guillotine cutters may come in different sizes and are therefore appropriate for different sizes of cigar, so if you prefer cigars with a wider ring gauge you’ll want a cutter that can accomodate this.

How to use a guillotine cutter

When you use a guillotine cutter, you need to make sure that the blade, or blades, are as sharp as possible. The cutting action should be quick, firm and precise. You can improve accuracy by holding the cigar relatively near to the head. Holding the cigar as still as possible and moving the cutter onto it, rather than the other way around, gives you more control. Some guillotine cutters have a back to them, meaning that you can’t insert too much of the cigar into the cutter and cut too much off. If yours doesn’t then you’ll have to pay close attention to where you’re cutting your cigar. You should try to cut above the cap, rather than below it, as this can be too low and allow loose tobacco to get in your mouth as you smoke. At the Cigar Club, we particularly like the Xikar Enso Double Guillotine Cutter, which is an extremely precise and hard-wearing cutter which you can rely on for years to come.

The wedge or V cutter is a somewhat less popular style of cutter than the guillotine cutter, but it’s still the favourite of many cigar-smokers around the world. This kind of cutter creates a V-shaped incision in the head of your cigar, which you’re then able to smoke it through. To get a stronger draw and a richer flavour, you’ll need to cut a little deeper into the cigar, while a shallow incision will reduce the strength and intensity of your smoke.

How to use a wedge cutter

Most V-shaped cutters, such as the sleek and ergonomic Colibri V-Cut have sharp steel blades which are arranged in a V-shape. This means that all you have to do is hold the cigar still and ensure that the blades hit the right point on the cap. This kind of cutter is known to work particularly well on cigars which are smaller in circumference, and to give a greater surface area and therefore more flavour than a punch.

A punch cigar cutter has a cylindrical blade which is used to punch a holein the head of your cigar, allowing you to smoke it. Some punch cutters are referred to as bullet punch cutters and tend to be small, often fitting on a keyring like this Xikar punch cutter, and unsurprisingly resemble a bullet in appearance. These cutters tend to leave a smaller hole than larger alternatives and therefore give you a tight draw with greater intensity, thanks to the smaller opening which the smoke has to escape from. Some punch cutters do have a larger circumference for smokers who prefer a looser draw.

How to use a punch cutter

Punch cutters are best used on standard shaped cigars and not those which are tapered at the head. Some models have retractable blades, so you’ll need to extend it before use. Keeping a steady hand, you align the blade at the centre point of the cigar’s head, and push into it. You don’t use the more decisive and forceful motion needed with a guillotine cutter, as with a punch cutter this can damage the cigar, and instead you press the blade through the wrapper and remove it gently. You should be left with a neat hole through which to smoke.

Can you cut a cigar without a cutter?

The risks of cutting your cigars improperly can be that an overly high cut causes the wrapping of the cigar to unravel, or it opens the head too wide and the cigar can burn too hot and too quickly so that it draws too easily. The risk of ruining the cigar with a non-specialised and potentially blunt blade, such as that from a kitchen knife or a pair of ordinary scissors, can ruin your favourite Montecristo or Padron cigar, wasting your money and good tobacco. You might have seen a film star or two bite the end of their cigar before lighting up, but be warned! This is a terrible idea, and is much more likely to result in a mouthful of tobacco than a smooth Hollywood-style smoking experience.